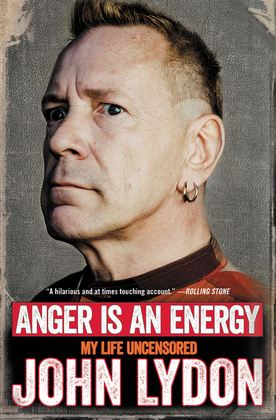 Anger Is an Energy

From the legendary frontman of the Sex Pistols, comes the complete, unvarnished story of his life in his own words.

John Lydon is an icon—one of the most recognizable and influential cultural figures of the last forty years. As Johnny Rotten, he was the lead singer of the Sex Pistols-the world’s most notorious band. The Pistols shot to fame in the mid-1970s with songs such as “Anarchy in the UK” and “God Save the Queen.” So incendiary was their impact at the time that in their native England, the Houses of Parliament questioned whether they violated the Traitors and Treasons Act, a crime that carries the death penalty to this day. The Pistols would inspire the formation of numerous other groundbreaking groups and Lydon would become the unlikely champion of a generation clamoring for change.

Following on the heels of the Pistols, Lydon formed Public Image Ltd (PiL), expressing an equally urgent impulse in his character: the constant need to reinvent himself, to keep moving. From their beginnings in 1978 PiL set the groundbreaking template for a band that continues to challenge and thrive to this day, while also recording one of the eighties most powerful anthems, “Rise.” Lydon also found time for making innovative dance records with the likes of Afrika Bambaataa and Leftfield. By the nineties he’d broadened his reach into other media while always maintaining his trademark invective and wit, most memorably hosting Rotten TV on VH1.

John Lydon remains a captivating and dynamic figure to this day—both as a musician, and, thanks to his outspoken, controversial, and from-the-hip opinions, as a cultural commentator. In Anger is an Energy, he looks back on a life full of incident, from his beginnings as a sickly child of immigrant Irish parents growing up in post-war London to his present status as a vibrant, alternative hero.

The book includes 70 black-and-white and color photos, many which are rare or never-before-seen.