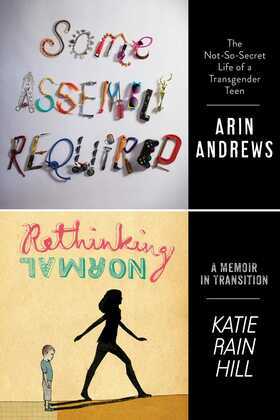 Some Assembly Required and Rethinking Normal

About Some Assembly Required: The Not-So-Secret Life of a Transgender Teen:
We’ve all felt uncomfortable in our own skin at some point, and we’ve all been told that “it’s just a part of growing up.” But for Arin Andrews, it wasn’t a phase that would pass. He had been born in the body of a girl and there seemed to be no relief in sight…
In this first-of-its-kind memoir, Arin details the journey that led him to make the life-transforming decision to undergo gender reassignment as a high school junior. He also writes about the thrill of meeting and dating a young transgender woman named Katie Hill—and the heartache that followed after they broke up.
Some Assembly Required is a true coming-of-age story about knocking down obstacles and embracing family, friendship, and first love. But more than that, it is a reminder that self-acceptance does not come ready-made with a manual and spare parts. Rather, some assembly is always required.

About Rethinking Normal: A Memoir in Transition:
Have you ever worried that you’d never be able to live up to your parents’ expectations? Have you ever imagined that life would be better if you were just invisible? Have you ever thought you would do anything—anything—to make the teasing stop? Katie Hill had and it nearly tore her apart. Katie realized very young that a serious mistake had been made: she was a girl who had been born in the body of a boy.
In this first-person account, Katie reflects on her pain-filled childhood and the events leading up to the life-changing decision to undergo gender reassignment as a teenager. She reveals the unique challenges she faced while unlearning how to be a boy and shares what it was like to navigate the dating world and experience heartbreak for the first time in a body that matched her gender identity.
Told in an unwaveringly honest voice, Rethinking Normal is a coming-of-age story about transcending physical appearances and redefining the parameters of “normalcy” to embody one’s true self.