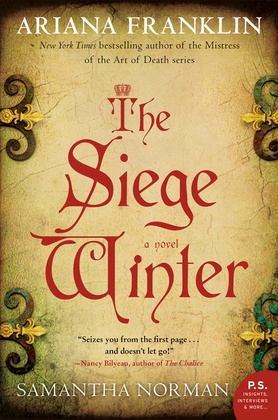 A powerful historical novel by the late Ariana Franklin and her daughter Samantha Norman, The Siege Winter is a tour de force mystery and murder, adventure and intrigue, a battle for a crown, told by two courageous young women whose fates are intertwined in twelfth century England’s devastating civil war.

1141. England is engulfed in war as King Stephen and his cousin, the Empress Matilda, vie for the crown. In this dangerous world, not even Emma, an eleven-year-old peasant, is safe. A depraved monk obsessed with redheads kidnaps the ginger-haired girl from her village and leaves her for dead. When an archer for hire named Gwyl finds her, she has no memory of her previous life. Unable to abandon her, Gwyl takes the girl with him, dressing her as a boy, giving her a new name—Penda—and teaching her to use a bow. But Gwyn knows that the man who hurt Penda roams free, and that a scrap of evidence she possesses could be very valuable.

Gwyl and Penda make their way to Kenilworth, a small but strategically important fortress that belongs to fifteen-year-old Maud. Newly wedded to a boorish and much older husband after her father’s death, the fierce and determined young chatelaine tempts fate and Stephen’s murderous wrath when she gives shelter to the empress.

Aided by a garrison of mercenaries, including Gwyl and his odd red-headed apprentice, Maud will stave off Stephen’s siege for a long, brutal winter that will bring a host of visitors to Kenilworth—kings, soldiers . . . and a sinister monk with deadly business to finish.