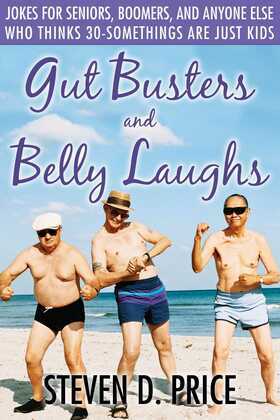 by Steven D. Price (Author)
Excerpt
Nonfiction Humor Form Jokes & riddles Anecdotes Topic Adult
warning_amber
One or more licenses for this book have been acquired by your organisation details

Although no one has ever said that growing old is a zany laugh riot, humor certainly eases the path to and through one’s golden years. And here is a heaping dose of jokes and anecdotes (anecdotes for one’s anec-dotage, you might say) to lighten and brighten the day of anyone who’s reached that certain age. You and the special senior in your life will laugh at jokes about a wide range of subjects, including . . .

One-Liners: I’ve learned that life is like a roll of toilet paper. The closer it gets to the end, the faster it goes.” Andy Rooney
Memory: A senior citizen driving on the highway received a cell phone call from his wife. Herman, be careful! I just heard on the radio that there was a madman driving the wrong way on Route 280!” The husband replied, I know, but there isn’t just onethere are hundreds!”
Sex and the Senior: An eighty-two-year-old man went to his doctor for a physical. A few days later the doctor saw him walking down the street with a gorgeous young woman on his arm.

The man replied, I’m just doing what you said, DocGet a hot mamma and be cheerful.’”

The doctor said, I didn't say that. I said, You’ve got a heart murmur. Be careful.’”

Belly Laughs is a lode” of fun for the young at heart of all ages, especially the golden age. Remember this bit of sage advice: If you laugh a lot, when you get older your wrinkles will be in the right places.”