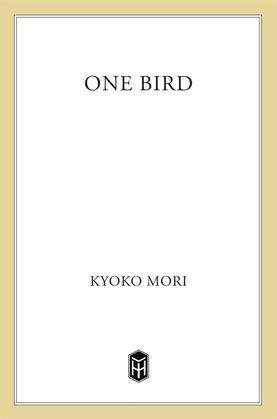 I try to see him among a migrating flock--he will take the loneliness of my room on his long journey; each whistling note he makes will be a little of my sadness falling over the ocean, to be swallowed in the clash of waves and the commotion of many birds flying.

"Tell me the truth," demands fifteen-year-old Megumi Shimizu as her mother hurriedly packs. But her mother refuses to admit that she is leaving forever--leaving her husband to his mistress, her home to her silent, resentful mother-in-law, her daughter to survive, if she can. Angry at everyone's polite lies, Megumi realizes that she has a secret of her own: Even though she goes to church, to Bible study class, and to the Christian Girls' Academy, she no longer believes in God. Only Dr. Mizutani, the "spinster lady" veterinarian, tells the truth, and she warns that single birds without their mothers often die.

In One Bird, a coming-of-age novel about mothers and daughters, about best friends, boyfriends, and families, Kyoko Mori uses folktales, images of birds, and details of bird life to explore the bonds of love that go deeper than lies. As Megumi learns how to care for injured waxwings, crows, sparrows, and one abandoned grosbeak, she begins her own flight toward truth, and toward home.