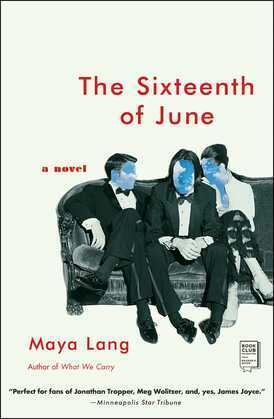 The Sixteenth of June: A Novel

A finely observed debut novel that paints a funny, moving, truthful portrayal of a family at a turning point: “A triumph” (Helen Schulman, New York Times bestselling author of This Beautiful Life).

Leopold Portman dreams of settling down in Philadelphia’s bucolic suburbs and starting a family with his fiancée, Nora. A talented singer in mourning for her mother, Nora has abandoned a promising opera career and wonders what her destiny holds. Her best friend, Stephen, Leopold’s brother, dithers in his seventh year of graduate school and privately questions Leo and Nora’s relationship. On June 16, 2004, the three are brought together—first for a funeral, then for the Portmans’ annual Bloomsday party. As the long-simmering tensions between them rise, they must confront their pasts and their hopes for the future.

Clever, lyrical, and poignant, The Sixteenth of June delves into the frictions and allegiances of friendships, the murky uncertainty of early adulthood, and the yearning to belong. Offering a nod to James Joyce’s Ulysses, this remarkable novel explores the secrets we keep and the lengths we go to for acceptance and love. It is “a perfect book for fans of Jonathan Tropper, Meg Wolitzer, and, yes, James Joyce” (Star Tribune, Minneapolis).