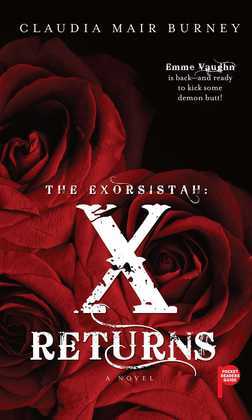 
fun new series about a young woman fighting to overcome her own personal demons and the forces of darkness.

Emme Vaughn has walked away from her home and the love of her life, all so she can snatch her mother from the clutches of evil. When she arrives at the mental hospital her mother has languished in, she’s astounded to find her mother isn’t there. She’s given an important key to her past and future and now must begin a new search.

Adding to Emme’s never ending challenges is an ancient devil that has stepped up its game, inexplicably attacking Emme with more force than ever and the fact that she’s ducking her sweetheart, Francis. Francis, led by his spiritual intuition—and MapQuest directions she left on his computer screen—is hot on her trail. Can a girl get a break?

Exorsistah has a job to do. She has no idea what she’s up against but she has to save her loved ones. Assembling her own rag-tag band of believers that include friends and a couple of Archangels to go up against the devil’s kingdom is just the beginning. Emme is out to defeat one of history’s most destructive forces, and learn that one of the most powerful forces known to man—love—really does win in the end.