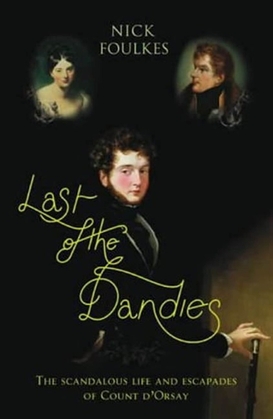 Last of the Dandies

From his first appearance in London in 1821 until his death in Paris in 1852, Count D'Orsay dominated and scandalized the whole of European society. For three decades he was the ultimate arbiter in matters of taste, style and fashion -- what D'Orsay wore today, society would wear tomorrow.

He also enthralled Society with the thirty-year soap opera of his relationship with Lady Blessington, whose daughter he married and with whose husband he was suspected of having had an affair. Bisexual, flamboyant and outrageous, D'Orsay was said to have ruined the cream of British aristocracy. He toured Europe on an enormous spending spree; paid homage to a dying Lord Byron in Italy, set up a racing course in Notting Hill and a gambling den in St James's.

Nick Foulkes' Last of the Dandies is a vivid biography of an astonishingly flamboyant figure and a dazzling portrait of an era.