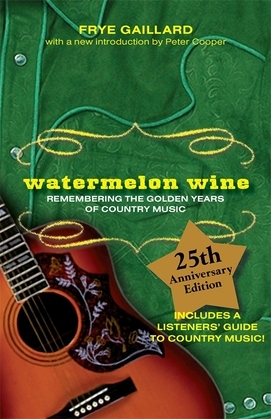 Originally published 25 years ago, Watermelon Wine was praised for its honest, unsentimental examination of the compassion as well as the passion behind authentic country music. Author Frye Gaillard looked at the commercialization of the Grand Ole Opry; the tradition-minded rebels such as Hank Williams, Waylon Jennings, and Tompall Glaser; the growing divide between country and folk music; how Johnny Cash inspired new songwriters and new ideas; how the changing relationships between men and women were affecting the music; the role of God and gospel; and Southern rock’s increasing influence. A quarter-century later, the essays in the book seem prophetic and in many cases have become even more relevant. A new introduction by Nashville music journalist Peter Cooper and a new afterword by the author update the book’s themes and show what has happened to its personalities.