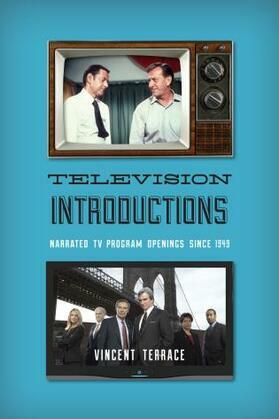 by Vincent Terrace (Author)
Buy for $110.00 Excerpt
Nonfiction Arts Mass media Television Reference Guides & reviews History & criticism
warning_amber
One or more licenses for this book have been acquired by your organisation details

Since the beginning of network television, many shows have been preceded by an announcement or theme song that served various purposes. In the 1950s and ’60s, it was common for announcers to declare that a program had been “brought to you by” a sponsor who paid for the privilege of introducing a show. Other programs, such as The Twilight Zone, Star Trek, and The Odd Couple, provided a brief encapsulation of the show’s subject matter, a practice that has continued for recent shows like Alias, Battlestar Galactica, Person of Interest, and the various editions of Law & Order.

In Television Introductions: Narrated TV Program Openings since 1949, Vincent Terrace has assembled openings for more than nine hundred television shows from the past seven decades. The only documented history of narrated television program introductions, this volume is arranged by type of programming, such as comedy, drama, Western, game show, soap opera, and children’s show. In addition to quoting the opening material, entries provide information about each show’s network history and years of broadcast. Many entries include descriptions of the show, the names of announcers, and a list of main cast members, as well as a sponsor pitch exactly as spoken. Openings for programs with multiple introductions like The Adventures of Ozzie and Harriet and Charlie’s Angels are also included.

For programs that featured new guest stars every episode—such as game shows and variety programs—Terrace has selected a representative introduction. In addition to the theme song credits found in the main text, there are also appendixes of theme songs and their composers and/or singers, as well as a listing of commercial releases (on DVD, VHS, CD, and LP) of shows and their soundtracks. A comprehensive resource for researchers and pop culture aficionados alike, Television Introductions provides a fascinating look at this neglected part of TV history.