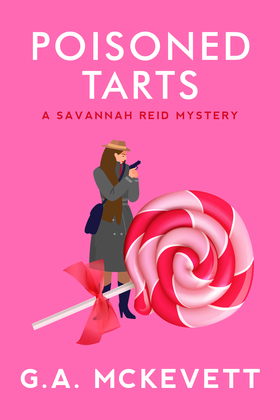 Savannah Reid #13
by G. A. McKevett (Author)
Buy for $18.70 Excerpt
Fiction Mystery & detective Women sleuths English literature American and Canadian literature
warning_amber
One or more licenses for this book have been acquired by your organisation details

A plus-sized PI’s search for a celebrity hanger-on leads to murder in this cozy mystery by the acclaimed author of Fat Free and Fatal.

Halloween in southern California just doesn’t have the frosty bite Savannah’s used to, although her latest job promises chills aplenty. The Skeleton Key Three, a celebutante clique so named by the media because of their super-skinny figures and fat trust funds, are in the spotlight again—but this time, it's for something more than partying. It seems the one member of the Three who was neither wealthy nor particularly svelte hasn’t been heard from in days.

The missing girl’s name is Daisy O’Neil, and by all accounts, she had little in common with her so-called friends Tiffy, Kiki, and Bunny. Chubby, smart, and less-than-privileged, Daisy’s role in the Three seems to have been primarily to be the victim of their vicious jibes and pranks. When Savannah learns that Tiffy’s acting aspirations were threatened by Daisy's genuine talent, the poor little rich girl begins to look big-time guilty.

But just when Savannah thinks she has it all figured out—except where the body is stashed—the vibe surrounding the Skeleton Key Three changes from vacuous and suspicious to downright murderous. As preparations are being made for a monster Halloween party, to be held on the Dante compound, the patriarch himself is spotted dressed as Dracula, laid out in his coffin, complete with a real stake through his no-longer-beating heart. Now, with the party seriously pooped and the tabloids on a tear, Savannah will have to put her Halloween candy on the shelf until she's deserving of a reward. And that means finding a killer—fast—before more Hollywood money becomes buried treasure.

“Savannah . . . deftly handles a collection of teens who could have been ripped fro