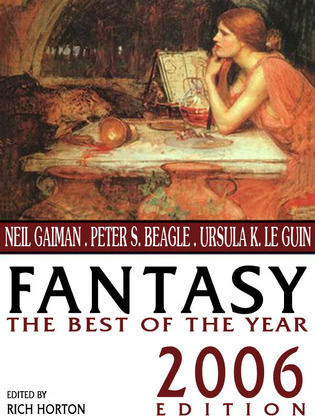 Fantasy: The Best of the Year

The best stories of the year: here is a collection of the year's best fantasy stories, by some of the genre's greatest authors, and selected by Rich Horton, a contributing reviewer to many of the field's most respected magazines. In this volume you'll find stories Peter Beagle, Paul Di Filippo, Neil Gaiman, Theodora Goss, Kelly Link, Gene Wolfe and many more!

PIP AND THE FAIRIES, by Theodora Goss

THE EMPEROR OF GONDWANALAND, by Paul Di Filippo

THE SECRET OF BROKEN TICKERS, by Joe Murphy

ON THE BLINDSIDE, by Sonya Taaffe

IS THERE LIFE AFTER REHAB? by Pat Cadigan

BY THE LIGHT OF TOMORROW?S SUN, by Holly Phillips

THE GIST HUNTER, by Matthew Hughes