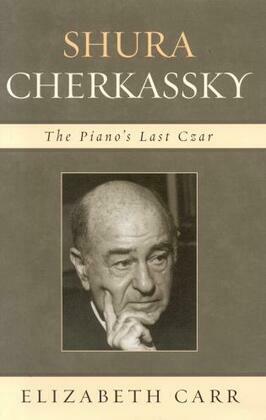 Shura Cherkassky's life story, like his piano playing, is provocative and captivating. At his death in 1995, Cherkassky was considered one of history's greatest pianists, as well as the last direct link to the Romantic piano tradition of Chopin, Liszt, and Anton Rubinstein.

Cherkassky's story merits telling not only for his musical achievements but also for the inspiration he provided by demonstrating tenacity, integrity, common sense, and uncommon courage. Cherkassky began his concert playing life in Ukrainian Odessa at a time of lethal civil strife. Escaping with his parents to America, the child prodigy came under the tutelage of famed pianist Josef Hofmann, whose unfailing personal and professional assistance continued for more than twenty years. Cherkassky overcame poverty, prejudice against his Jewish origins, and unhappiness from his ambivalence over his homosexuality to forge an impressive touring and recording career, an enormous musical repertoire, and an intriguing personality both on stage and off. From his sensational 1923 American debut tour to sold-out concerts on six continents, Cherkassky retained his brilliance throughout a seventy-five year professional career.

As a close friend for his last twenty years, author Elizabeth Carr traveled with Cherkassky on tour, attending recording and rehearsal sessions and watching him practice, plan programs, and cope with pianos, acoustics, conductors, and orchestras. Her role as confidante results in a keen understanding of Cherkassky both as a human being and a performer. Through observations, anecdotes, sixteen pages of photos, and personal correspondence reprinted in the book, this biography offers extensive research never before published, and an intimate look at the man and his music.