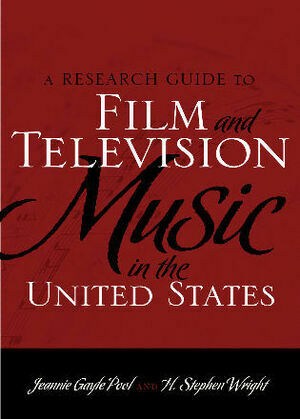 Unlike traditional music, film music sources are often difficult to locate and do not follow the patterns that researchers are trained to identify. Although there have been several self-described introductions to the field and articles that summarize the problems and state of research, there is no resource that gathers together all of the basic information that is vital to film music research. In this volume, Jeannie Gayle Pool and H. Stephen Wright address the difficulties scholars encounter when conducting research on film and television music.

Intended as a guide for scholars and researchers in navigating the complex world of film and television music, this book provides a detailed taxonomy of film music primary sources and explains how to find and interpret them. The authors tackle the problems of determining film score authorship and working with recordings of film music. A bibliographic essay summarizes the major works and trends in film music research and provides clear pointers to the most important resources in the field. An up-to-date guide to important collections of film music sources and other research materials is also included. Designed to clarify the nature of film music source materials and how they are generated, A Research Guide to Film and Television Music in the United States provides clear signposts for scholars and identifies opportunities for further research.