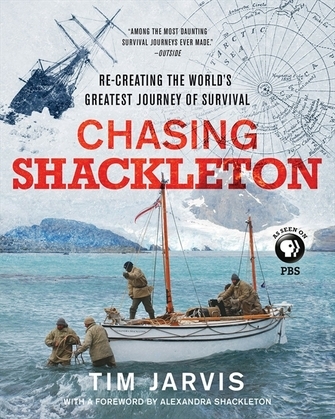 In this extraordinary adventure memoir and tie-in to the PBS documentary, Tim Jarvis, one of the world's leading explorers, describes his modern-day journey to retrace, for the first time ever—and in period clothing and gear—the legendary 1914 expedition of Sir Ernest Shackleton.

In early 1914, British explorer Sir Ernest Shackleton and his team sailed for Antarctica, attempting to be the first to reach the South Pole. Instead of glory, Shackleton and his crew found themselves in an epic struggle for survival: a three-year odyssey on the ice and oceans of the Antarctic that endures as one of the world’s most famous tales of adventure, endurance, and leadership ever recorded.

In the winter of 2013, celebrated explorer Tim Jarvis, a veteran of multiple polar expeditions, set out to recreate Sir Ernest Shackleton’s treacherous voyage over sea and mountain, outfitted solely with authentic equipment—clothing, boots, food, and tools—from Shackleton’s time, a feat that has never been successfully accomplished.

Shackleton's Epic is the remarkable record of Jarvis and his team’s epic journey. Beautifully designed and illustrated with dozens of photographs from the original voyage and its modern reenactment, it is a visual feast for readers and historians alike, and an essential new chapter in the story that has inspired adventurers across every continent for a century.