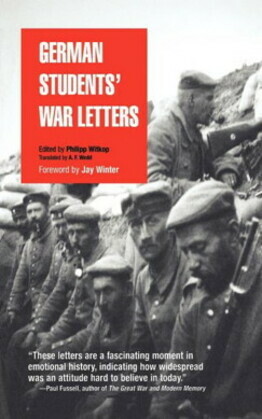 Originally appearing at the same time as the pacifist novel All Quiet on the Western Front, this powerful collection provides a glimpse into the hearts and minds of an enemy that had been thoroughly demonized by the Allied press. Composed by German students who had left their university studies in order to participate in World War I, these letters reveal the struggles and hardships that all soldiers face.

The stark brutality and surrealism of war are revealed as young men from Germany describe their bitter combat and occasional camaraderie with soldiers from many nations, including France, Great Britain, and Russia. Like its companion volume, War Letters of Fallen Englishmen, these letters were carefully selected for their depth of perception, the intensity of their descriptions, and their messages to future generations. "Should these letters help towards the establishment of justice and better understanding between nations," the editor reflects in his introduction, "their deaths will not have been in vain." This edition contains a new foreword by the distinguished World War I historian Jay Winter.