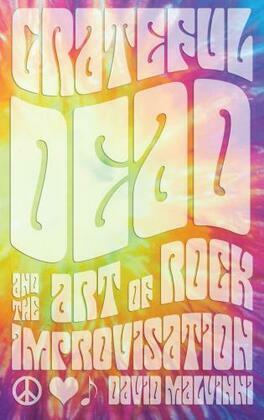 Grateful Dead and the Art of Rock Improvisation

Over 15 years since the death of lead guitarist and singer Jerry Garcia, the Grateful Dead stands as a cultural symbol of the unresolved cultural clashes of 1960s. The band’s 30-year odyssey is a testament to the American imagination, with thousands of live concert recordings by fans and the band itself, preserved alongside a cultural iconography of images, artwork, and paraphernalia. Most recently, the Grateful Dead has stepped up release of its live archive of recordings, culminating in one of the largest boxed sets of live music—73 compact discs—ever released.

This publicly available archive of recorded music lays the groundwork for David Malvinni’s exploration in Grateful Dead and the Art of Rock Improvisation on the band’s musical signature as the ultimate jam band. Malvinni considers a a select group of songs from the Dead’s early repertoire, from its unique covers of “Viola Lee Blues,” “Midnight Hour,” and “Love Light” to original masterpieces like “Dark Star.” Marrying basic music analysis to philosophical frames offered by improvisatory musings of Heidegger, Derrida, and Deleuze, Malvinni outlines the core aesthetic underlying the Dead’s musical styling.

In tracing the evolution of the band’s unique jam style, Malvinni outlines The Dead’s gift as gatherers and collectors of old and new soundscapes in their improvisations. Like no other band, The Dead brought together a variety of styles from roots and folk to country and free jazz to postmodern European art music. Devoted Deadheads reveled in the band’s polyglot approach to playing live, its free-wheeling and often risky efforts to reach a type of cosmic ecstasy, commonly described as the “X factor.”

Although fans and scholars alike recognize the Grateful Dead as icons of the psychedelic music, the band’s improvisatory approach still remains an enigma to the uninitiated. In Grateful Dead and the Art of Rock Improvisation, Malvinni unravels this mystery, walking readers through the band’s musical decision-making process. Written for rock music fans with little to no background in music theory, and scholars and students of popular music culture, the book reveal the method behind the seeming madness of America’s greatest jam band.