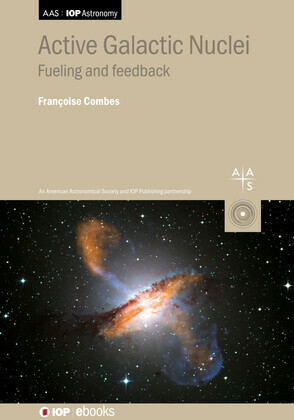 by Françoise Combes (Author)
Buy for $159.00 Excerpt
Nonfiction Science and technics Science Astronomy Astrophysics & space science
warning_amber
One or more licenses for this book have been acquired by your organisation details

Almost all galaxies host in their center a supermassive
black hole of mass between a million and tens of billions solar masses. Supermassive black holes grow in symbiosis
with their host galaxies across the Hubble time, occasionally accreting
surround matter, giving rise to an Active Galactic Nuclei (AGN). This book gives a general review of our current knowledge
of AGN, powered by supermassive black holes: how they are fueled by gas (or
stars) and what problems are encountered; how can we account for the wide
variety of AGN, from Seyfert/Liners to quasars, and for the two types (AGN 1
and 2) either through dust obscuration, and geometrical orientation arguments,
or through intrinsic activity difference, qualitative or quantitative. With
modern instruments, providing high resolution and sensitivity, like ALMA in
radio, or MUSE at the ESO/VLT, it is possible to unveil the interstellar medium
and stars in the circumnuclear regions, discover molecular disks and tori, in
the sphere of influence of the black holes. While AGN are accreting matter,
they are providing so much energy that part of the surrounding gas is expelled
and is observed in molecular outflows, identified as the main feedback process
of AGN on their host.