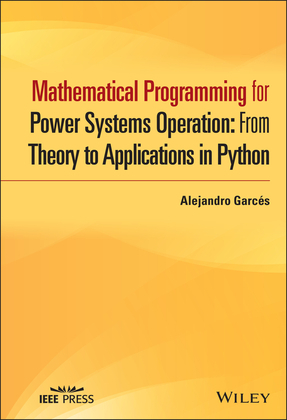 by Alejandro Garces Ruiz (Author)
Buy for $100.00 Excerpt
Nonfiction Science and technics Science Physics Energy
warning_amber
One or more licenses for this book have been acquired by your organisation details

In Mathematical Programming for Power System Operation with Applications in Python, Professor Alejandro Garces delivers a comprehensive overview of power system operations models with a focus on convex optimization models and their implementation in Python. Divided into two parts, the book begins with a theoretical analysis of convex optimization models before moving on to related applications in power systems operations.

Mathematical Programming for Power System Operation with Applications in Python uses Python and CVXPY as tools to solve power system optimization problems and includes models that can be solved with the presented framework. The book also includes:

Perfect for undergraduate students with some knowledge in power systems analysis, generation, or distribution, Mathematical Programming for Power System Operation with Applications in Python is also an ideal resource for graduate students and engineers practicing in the area of power system optimization.