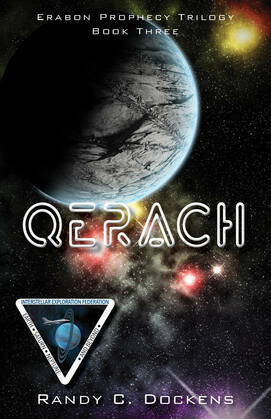 by Randy C Dockens (Author)
Buy for $3.99 Excerpt
Fiction Science fiction Adventure Christian Futuristic
warning_amber
One or more licenses for this book have been acquired by your organisation details

After arriving on another alien planet, a human astronaut, nicknamed Nuke, attempts to bring two alien cultures together but find they distrust each other even more than they distrust him.

Nuke is now to unite the final two alien worlds, Qerach and Aphiah, of the Erabon system. With him are his humanoid friends from the other alien planets he visited and united. Arriving using the interstellar gates Nuke brought with him, he finds those on these two planets look more like him, yet he finds them unwilling to accept him or his mission, even though, supposedly, it is the will of Erabon, their deity, they do. Every step he takes leads to conflict and division. He finds he first must unite those living on each planet before he can unite them across the other worlds. Will he be able to help them come together and prepare for Erabon’s return? Or will all his efforts now be found futile and plunge them more towards their ultimate destruction than toward their ultimate salvation?

Qerach is the third and final book of the unique Christian science fiction series entitled Erabon Prophecy Trilogy by futuristic fiction author Randy C Dockens. If you like the metaphorical imagery used by the great C.S. Lewis in several of his writings, then you will enjoy this series which also uses a similar technique. Also, the romantic interests between Nuke and the female Myeemian flourish further offering a romantic read amid the attempts to unite these alien cultures as Nuke realizes his return to his solar system through the interstellar gates is remote.

Get your copy of Qerach and let your imagination soar in this exciting conclusion to this unique Christian science fiction series today!