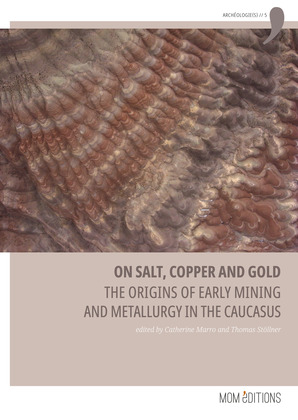 On salt, copper and gold

by Catherine Marro (Editor), Thomas Stöllner (Editor)
Buy for $10.99 Excerpt
Nonfiction Social science Archaeology
warning_amber
One or more licenses for this book have been acquired by your organisation details

An international conference focused on the beginnings of mining and metallurgy in the Caucasus was organised in Tbilisi in June 16th-19th 2016 under the auspices of the National Museum of Georgia. This conference, which was funded by the Agence nationale de la recherche (France) and the Deutsche Forschungsgemeinschaft (Germany), aimed at discussing the intricate relationships between the emergence of mining and metallurgy, and the shaping of late prehistoric societies in south-western Asia. The Caucasus is renowned in Near Eastern archaeology for its wealth in natural resources, in particular in metal ores: for decades, scholars have surmised a specific causal relationships between the rise of complex, hierarchical societies in the Near‐East and the development of extractive metallurgy. Metallurgy, however, is only the most visible part of the story that accounts for the dramatic changes perceptible in south‐western Asia in the course of the 5th millennium BCE. Early mining, which is not restricted to metal-ore mining, certainly also had an impact in terms of economic networks, social dynamics, settlement patterns and regional integration, not only across the Caucasus, but also in the ancient Near and Middle East. Drawing on these fundamental questions, this book explores the socio-economic, technological and environmental background that favoured the rise of systematic mining and extractive metallurgy in the Caucasus at the end of the Chalcolithic. How far was early mining linked to the spread of specific subsistence strategies such as pastoral herding? Were mined resources mainly intended for local consumption or distributed throughout the Near East, towards Anatolia, Iran or Mesopotamia? Here are some of the issues that are discussed in the present volume, which contains 21 articles written by some of the most eminent specialists in Caucasian archaeology.