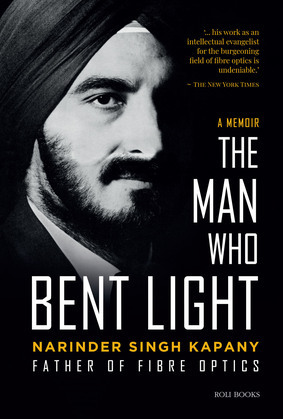 by Narinder Kapany (Author)
Buy for $9.99 Excerpt
Nonfiction Biography & autobiography Personal memoirs Science & technology
warning_amber
One or more licenses for this book have been acquired by your organisation details

Dr. Narinder Singh Kapany (1926–2020), widely known as the father of fibre optics, was born in Punjab and after graduating in India, moved to the Imperial College London for his doctorate.

In 1953, working alongside Harold Hopkins at Imperial College London, Dr. Kapany was the first to successfully transmit high-quality images through fibre bundles. He coined the term fibre optics in a famous 1960 article for Scientific American. His breakthrough achievements helped create a foundational element of the internet age, affecting the lives and businesses of millions around the world.

In 1961, Dr Kapany along with his wife moved to Woodside where he founded Optics Technology Inc. successfully taking it public in 1967. He was the first Sikh Indian to take a company public in Silicon Valley. The San Francisco Examiner, in February 1969, described him as ‘…the most dashing corporate officer in the area.’ Subsequently, he founded Kaptron Inc. in 1973, which was later acquired by AMP Inc.

A noted philanthropist, he was deeply committed to championing Sikh culture and language. He created the Sikh Foundation in 1967 which pioneered the display of Sikh Arts at the Victoria and Albert Museum in London, the Smithsonian Museum in Washington, DC and at the Rubin Museum New York. He established the first permanent Sikh Art Gallery in the United States at the Asian Art Museum in San Francisco and in Canada at the Montreal Museum of Art.

Recipient of various awards and honours, including Padma Vibhushan, one of the highest civilian awards of India, he was a man of enormous intellect, boundless energy and a lovely loud and infectious laugh. His passionate commitment to science and Sikh art has left an indelible impact on the lives of innumerable people around the world.The father of fibre optics, Narinder Singh Kapany was far more than your typical multi-hyphenate. Inventor, art collector, sculptor, farmer, entrepreneur, teacher, and a successful businessman, Dr Kapany was what Fortune magazine in its 1999 issue called, ‘one of the seven unsung heroes of the 20th century’. An insightful and inspirational life story, this memoir chronicles his ninety remarkable years. Charming, idiosyncratic, and highly engaging, The Man Who Bent Light serves up enough variety and verve to celebrate the lives of a half dozen individuals. But there is only one Narinder Singh Kapany, and his life, illuminated in his singular memoir, is a life like no other.