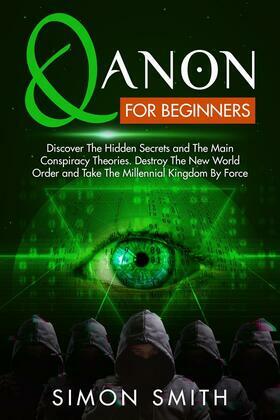 You've probably heard about the QAnon Conspiracy theory that has taken the world by storm, right? Are you ready to discover the hidden secrets of this theory?

If the answer is yes, then read on…

You are about to step into the world of conspiracies and discover one of the most talked-about, THE QANON CONSPIRACY.

QAnon has gained a lot of traction in the US and now Spilling over to the UK. It is a conspiracy theory that claims of the existence of a cabal that is comprised of Hollywood celebrities, Devil-Worshipping Democrats, and Billionaires who run the world. It also claims that these members engage in human trafficking, pedophilia, child abduction, and harvesting of chemical that has life-extending properties from the blood of children. The followers of this conspiracy believe that Donald Trump, The President of the United States, is waging a war against this cabal and all its collaborators to bring down all malefactors and lock them all in Guantanamo Bay.

That's a lot to grasp, right? The fact that you are reading this means that you have also been caught up in the craze and want to know what to believe in and what not to. You are probably wondering…

What evidence exists to support the theory?

Who unearthed these secrets and how did they do it?

How did such a theory spread?

Why are the supporters of this theory?

What is the main agenda behind this theory?

If my guess is right, and these are the questions you have in mind, then this book is for you. it has all the answers to these questions and a whole lot more that you will be surprised to learn about.

In this book, you will learn everything you need to know about the conspiracy theory down to the minor details in a very neutral and easy to comprehend manner.

Here is a sneak peek of what you are going to learn:

How and when the QAnon theory started

It's claims and its beliefs

its followers and how it is gaining such a large following

Actions that have been taken to suppress its spread

The real motive behind the QAnon theory

How conspiracy theories work and their outcomes

The relationship between President Donald Trump and the conspiracy theory

This conspiracy theory involves a lot of parts that you need to learn about and a lot of surprising claims. If you want to get all the surprising right information in a well-researched manner, then this is the book you should go for.