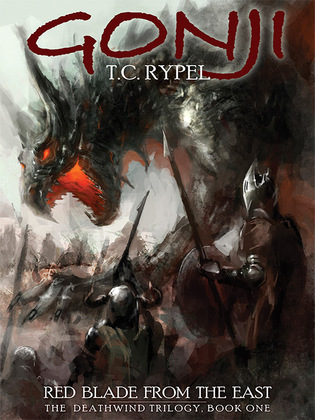 Gonji: Red Blade from the East: The Deathwind Trilogy, Book One

by T. C. Rypel (Author)
Buy for $4.99 Excerpt
Fiction Fantasy Epic Historical
warning_amber
One or more licenses for this book have been acquired by your organisation details

A legendary sword-and-sorcery hero returns! Gonji Sabatake, the conflicted samurai-Viking, seizes Destiny itself by the throat, as he pieces together and pursues the bizarre, mystical quest which powerful cross-world forces have forbidden--the mystery of the DEATHWIND! Cast out of his Japanese homeland, stalked by assassins both human and supernatural, Gonji surges across a barbaric, myth-infested 16th-century Europe, following the spoor of the creature called The Beast with the Soul of a Man-- But is this a wily Enemy, or an enigmatic Friend? Gonji's embattled, vampire-haunted flight brings him to the magnificent walls of Vedun, fabled and accursed city in the escarpments of the Carpathians, only to find the town vanquished and occupied by mercenaries and monsters, demons and foul sorcery, under the command of the storied, invincible King Klann. Here in Vedun begins Gonji's mighty, willful rebellion against an age-old tyranny which has held countless intertwined worlds in its thrall. This is just the first of many battles that will imperil loyal friends, comrades, and loved ones in a violent combat to restore universal free will and self-determination, to consign unchained supernatural menace to its foul curling place, to restore honor, faith and love to a world of enslavement and chaos. The adventure of Gonji's mind-boggling quest, revised and restored from its original publication, begins with RED BLADE FROM THE EAST, Book One of The Deathwind Trilogy! Kai Meyer writes: "GONJI is the most important rediscovery of classic fantasy since CONAN. Dark, complex, and fantastically well-written."