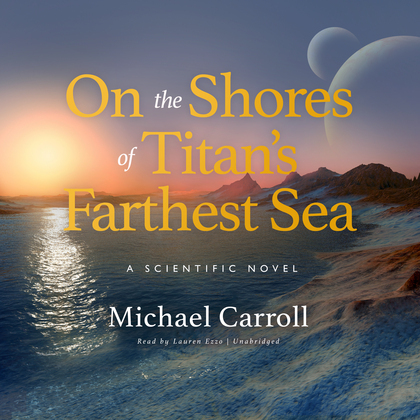 On the Shores of Titan’s Farthest Sea

by Michael Carroll (Author), Lauren Ezzo (Narrateur)
Excerpt
Fiction Science fiction Nonfiction Science and technics Science Astronomy Cosmology
warning_amber
One or more licenses for this book have been acquired by your organisation details

Titan is practically a planet in its own right, with a diameter similar to that of Mercury, methane rainstorms, organic soot, and ethane seas. All of the most detailed knowledge on the moon’s geology, volcanology, meteorology, marine sciences, and chemistry are gathered together here to paint a factually accurate hypothetical future of early human colonization on this strange world.

The views from Titan’s Mayda outpost are spectacular, but all is not well at the moon’s remote science base. On the shore of a methane sea beneath glowering skies, atmospherics researcher Abigail Marco finds herself in the middle of murder, piracy, and colleagues who seem to be seeing sea monsters and dead people from the past. On the Shores of Titan’s Farthest Sea provides thrills, excitement, and mystery—couched in the latest science—on one of the Solar System’s most bizarre worlds, Saturn’s huge moon Titan.