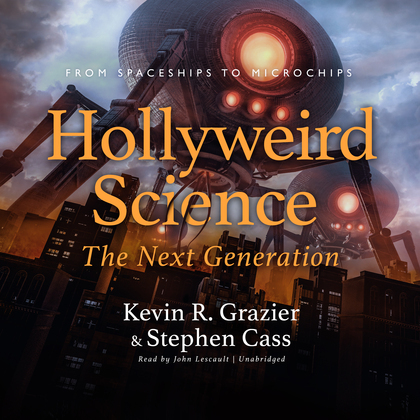 Hollyweird Science: The Next Generation

by Kevin R. Grazier (Author), Stephen Cass (Author), John Lescault (Narrateur)
Excerpt
Nonfiction Science and technics Science
warning_amber
One or more licenses for this book have been acquired by your organisation details

Informative, entertaining, and upbeat, this audiobook continues Grazier’s and Cass’s exploration of how technology, science, and scientists are portrayed in Hollywood productions. Both big and small-screen productions are featured and their science content illuminated—first by the authors and subsequently by a range of experts from science and the film world. Starring roles in this volume are played by, among other things, computers (human and mechanical), artificial intelligences, robots, and spacecraft. Interviews with writers, producers, and directors of acclaimed science-themed films stand side by side with the perspectives of scientists, science fiction authors, and science advisors. The result is a stimulating and informative listening experience for the layperson and professional scientist or engineer alike.

The audiobook begins with a foreword by Zack Stentz, who cowrote X-Men: First Class and Thor, and was a writer/producer on CW’s The Flash.