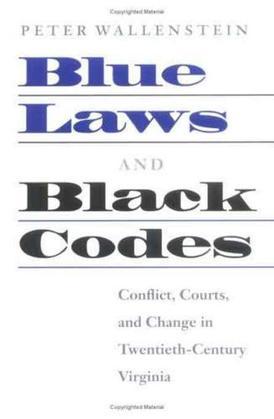 Women were once excluded everywhere from the legal profession, but by the 1990s the Virginia Supreme Court had three women among its seven justices. This is just one example of how law in Virginia has been transformed over the past century, as it has across the South and throughout the nation.

In Blue Laws and Black Codes, Peter Wallenstein shows that laws were often changed not through legislative action or constitutional amendment but by citizens taking cases to state and federal courtrooms. Due largely to court rulings, for example, stores in Virginia are no longer required by "blue laws" to close on Sundays.

Particularly notable was the abolition of segregation laws, modified versions of southern states' "black codes" dating back to the era of slavery and the first years after emancipation. Virginia's long road to racial equality under the law included the efforts of black civil rights lawyers to end racial discrimination in the public schools, the 1960 Richmond sit-ins, a case against segregated courtrooms, and a court challenge to a law that could imprison or exile an interracial couple for their marriage.

While emphasizing a single state, Blue Laws and Black Codes is framed in regional and national contexts. Regarding blue laws, Virginia resembled most American states. Regarding racial policy, Virginia was distinctly southern. Wallenstein shows how people pushed for changes in the laws under which they live, love, work, vote, study, and shop-in Virginia, the South, and the nation.