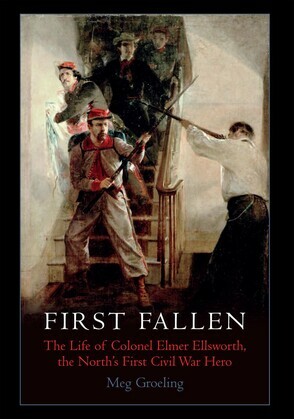 On May 24, 1861, Col. Elmer Ellsworth became the first Union officer killed in the Civil War. The entire North was aghast. First Fallen is the first modern biography of this national celebrity, Northern icon, and mostly forgotten national hero.

Ellsworth and his entertaining U.S. Zouave Cadets drill team had performed at West Point, in New York City, and for President, James Buchanan before returning home to Chicago. He helped his friend and law mentor Abraham Lincoln in his quest for the presidency, and when Lincoln put out the call for troops after Fort Sumter was fired upon, Ellsworth responded. Within days he organized more than 1,000 New York firefighters into a regiment of volunteers.

When he was killed, the Lincolns rushed to the Navy Yard to view the body of the young man they had loved as a son. Mary Lincoln insisted he lie in state in the East Room of the White House. The elite of New York brought flowers to the Astor House and six members of the 11th New York accompanied their commander’s coffin. When a late May afternoon thunderstorm erupted during his funeral service at the Hudson View Cemetery, eyewitnesses referred to it as “tears from God himself.” The death of the young hero was knocked out of the headlines eight weeks later by the battle of First Bull Run. The trickle of blood had now become a torrent that would not stop for four long years.

Groeling’s well-written biography is grounded in years of archival research and includes diaries, personal letters, newspapers, and many other accounts. In the six decades since the last portrait of Ellsworth was written, new information has been found that gives readers and historians a better understanding of the Ellsworth phenomenon and his deep connections to the Lincoln family.

First Fallen: The Life of Colonel Elmer Ellsworth, the North’s First Civil War Hero examines every facet of Ellsworth’s complex, fascinating life and adds richly to the historiography of the Civil War.