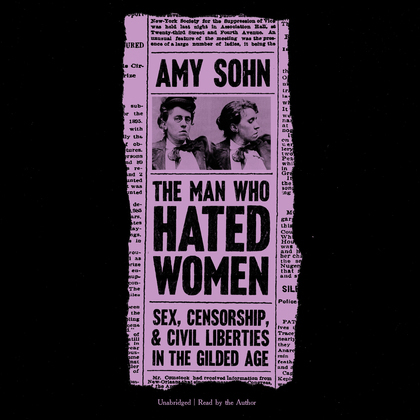 The Man Who Hated Women

Bestselling author Amy Sohn presents a narrative history of Anthony Comstock, antivice activist and US postal inspector, and the remarkable women who opposed his war on women’s rights at the turn of the twentieth century.

Anthony Comstock, special agent to the US Post Office, was one of the most important men in the lives of nineteenth-century women. His eponymous law, passed in 1873, penalized the mailing of contraception and obscenity with long prison sentences and steep fines. The word Comstockery came to connote repression and prudery.

Between 1873 and Comstock’s death in 1915, eight remarkable women were charged with violating state and federal Comstock laws. These “sex radicals” supported contraception, sexual education, gender equality, and women’s right to pleasure. They took on the fearsome censor in explicit, personal writing, seeking to redefine work, family, marriage, and love for a bold new era. In The Man Who Hated Women, Amy Sohn tells the overlooked story of their valiant attempts to fight Comstock in court and in the press. They were publishers, writers, and doctors, and they included the first woman presidential candidate, Victoria C. Woodhull; the virgin sexologist Ida C. Craddock; and the anarchist Emma Goldman. In their willingness to oppose a monomaniac who viewed reproductive rights as a threat to the American family, the sex radicals paved the way for second-wave feminism. Risking imprisonment and death, they redefined birth control access as a civil liberty.

The Man Who Hated Women brings these women’s stories to vivid life, recounting their personal and romantic travails alongside their political battles. Without them, there would be no birth control pill, no Planned Parenthood, no Roe v. Wade. This is the forgotten history of the women who waged war to control their bodies.