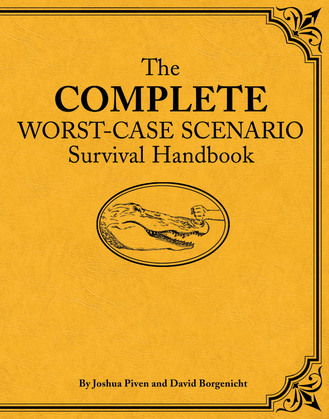 by Joshua Piven (Author), David Borgenicht (Author)
Excerpt
Nonfiction Humor Topic Relationships Reference Personal & practical guides Nature, recreation and sports Sports & recreation Outdoor skills
warning_amber
One or more licenses for this book have been acquired by your organisation details
A catastrophe compendium. The most popular scenarios from the series that has sold more than 10 million copies worldwide.

The worst of the worst, all in one place. Avoid the perils of mountain lions and blind dates, avalanches and teenage driving lessons, runaway golf carts and Christmas turkeys on fire. A remedy for every crisis the worst-case experts have anticipated is now only a click away. Boasting more than 500 pages, this sturdy addition to the Worst-Case Scenariolibrary could stop a bullet—just one more way to be prepared for the worst.

Part of the series that inspired “Worst-Case Scenario: A Survival Experience,” an interactive exhibit at the Franklin Institute in Philadelphia

“What this book lacks in spiritual enlightenment, it more than makes up for with the practical advice you thought you’d never need. Yet it’s only when you read about how to deliver a baby in the back of a taxi, surviving quicksand and mastering awkward lift silences that you realize just how handy a book like this could come in. Some day.” —The Irish Times

“Though neither written nor read in a humorous manner, the book nevertheless amuses in a strange way . . . affords some camp appeal in the tradition of outdated high school safety films.” —Publishers Weekly

“There is something for everyone. It has a wide range of scenarios from dangerous to just downright irritating . . . It is fun, witty, entertaining and you learn something along the way too.” —Quill Quotes
Protection
DRM Free
Format
EPUB
Publication date
October 12, 2021
Publisher
Chronicle Books Llc
Page count
526
ISBN
9780811873673
Paper ISBN
9780811861366
File size
9 MB