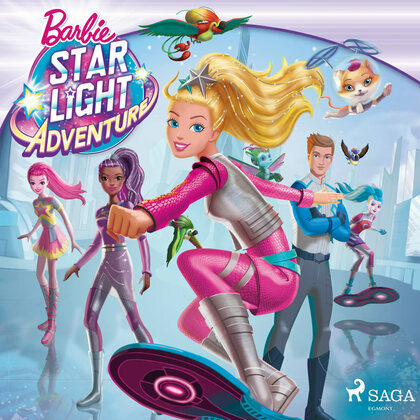 Once upon a time a very special girl named Barbie lived with her father on the far away planet Para-Den. The gifted girl spent her days looking after the planet's many extraordinary animals, while practicing her talent for hoverboarding.

One day King Constantine of the planet Oppa-Irri called out for Barbie’s help to keep the stars from disappearing! Despite of her many talents, Barbie found herself quite nervous about this since she had never left Para-Den before! Could she ever find the courage in her heart to venture out and save the stars?

Come on an amazing adventure with Barbie and all her friends! Solve mysteries with secret doors, sea monsters and messages in a bottle, catch the baddies as a secret agent, sing in Barbie’s rock band, celebrate Chelsea’s birthday in Dreamtopia and fly to tropical beaches and distant planets in far-away galaxies. Let’s go!

Mattel’s Barbie doll is a fashion icon, world adventurer and every child’s best friend. Since the 1950’s she remains a popular toy in homes worldwide and the star of countless tv shows, movies, and books.

The popular Netflix series Barbie Dreamhouse Adventures follows Barbie, her sisters and her boyfriend Ken, as they hang out in LA and travel the world in the Barbie camper van. For younger fans, Barbie’s little sister, Chelsea, takes centre stage in Barbie Dreamtopia as the sisters meet mermaids and fairies in a magical dreamland.

In recent years, Barbie has taken YouTube by storm as a popular vlogger. She talks fashion, family, her life in Malibu but also sensitively tackles tough issues like racism, mental health and body image.

Barbie and associated trademarks are owned by Mattel and used under license from Mattel Europa. © 2021 Mattel