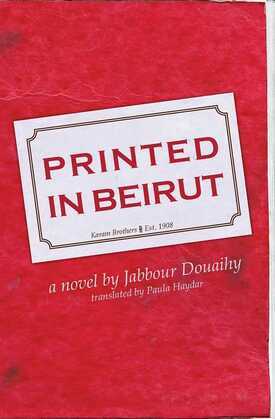 A DAZZLING MYSTERY SET IN THE WORLD OF LEBANON’S BOOK PUBLISHING INDUSTRY--Farid Abou Cha’r arrives in Beirut on a hot summer morning with his manuscript, looking for a publisher. He is turned down by all of them—“nobody reads anymore,” he is told. Instead, he accepts a job as a proofreader at the famous old print house “Karam Bros.,” allegedly established in 1908. Disappointed by the menial tasks of checking catalogs and ad copy, Farid secretly hopes that his book will eventually be published. His manuscript never leaves his side until one day it disappears and then reemerges, beautifully printed. Farid soon realizes that the expensive paper it’s printed on is the same that the company is using to manufacture fake twenty-euro bills, and that the person who printed the book is none other than his boss’s wife. Entangled in a police investigation and an illicit flirtation, Farid discovers that the Karam Bros. print house is not what it seems. Douaihy dizzies the reader with an intricate play of appearances and deception, and as always, portrays Lebanese society with exquisite irony.