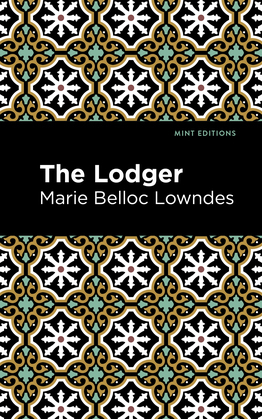 by Marie Belloc Lowndes (Author)
Buy for $9.99 Excerpt
Fiction Mystery & detective Historical
warning_amber
One or more licenses for this book have been acquired by your organisation details

The Lodger (1913) is a novel by Marie Belloc Lowndes. Inspired by the infamous murders committed by Jack the Ripper and Dr. Neill Cream—also known as the Lambeth Poisoner—The Lodger is a thriller that employs aspects of the popular penny dreadful novel while maintaining its literary status as a bone-chilling and highly original tale. “The room, especially when it be known that it was part of a house standing in a grimy, if not exactly sordid, London thoroughfare, was exceptionally clean and well-cared-for. A casual stranger, more particularly one of a Superior class to their own, on suddenly opening the door of that sitting-room; would have thought that Mr. and Mrs. Bunting presented a very pleasant cosy picture of comfortable married life.” Behind their polished exterior, the Buntings hide a common struggle. After countless failures, their business is threatened with total failure, forcing them to go cold and hungry in order to keep up appearances. As their savings plummet, a strange man named Mr. Sleuth arrives offering to pay for the next month in advance. The Buntings are in no position to turn him down. At the same time, a series of brutal murders shocks the city of London, raising their suspicions and fears to a fever pitch. The Lodger is a story of desperation and terror inspired by some of the twentieth century’s most notorious serial killers. With a beautifully designed cover and professionally typeset manuscript, this edition of Marie Belloc Lowndes’ The Lodger is a classic work of British literature reimagined for modern readers.