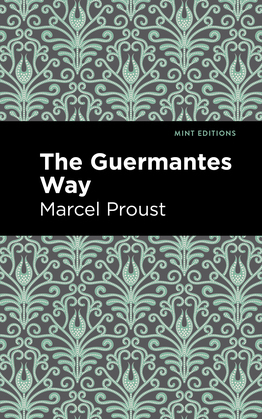 by Marcel Proust (Author)
Buy for $11.99 Excerpt
Fiction Classics Historical
warning_amber
One or more licenses for this book have been acquired by your organisation details

The Guermantes Way (1920/21) is the third volume of Marcel Proust’s seven-part novel In Search of Lost Time. Written while Proust was virtually confined to his bedroom from a lifelong respiratory illness, The Guermantes Way is a story of memory, history, family, and romance from a master of Modernist literature. Praised by Virginia Woolf, Vladimir Nabokov, Michael Chabon, and Graham Greene, In Search of Lost Time explores the nature of memory and time while illuminating the history of homosexuality in nineteenth century Europe. The narrator moves to an apartment neighboring the home of the aristocratic Guermantes family. He soon grows obsessed with the beautiful Mme. de Guermantes, who refuses his invitation to meet. Disappointed, he rekindles his friendship with her nephew Saint-Loup, a soldier who introduces him to the salon of Mme. de Villeparisis. There, he observes Mme. de Guermantes up close, but soon loses interest as he attempts to pursue Mme. de Stermaria. Only then, as his attention wavers, does he receive an invite to the Guermantes home. As he grows and learns, he begins to recognize the reality concealed by convention: the secret liaisons between lovers; the petty competitions of artists; the fleeting nature of affection and lust alike. Written in flowing prose, The Guermantes Way is a masterpiece of twentieth century fiction that continues to entertain and astound over a century after it appeared in print. With a beautifully designed cover and professionally typeset manuscript, this edition of Marcel Proust’s The Guermantes Way is a classic work of French literature reimagined for modern readers.