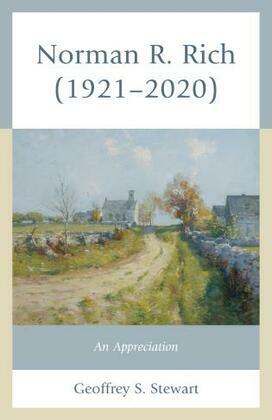 by Geoffrey S. Stewart (Author)
Buy for $19.00 Excerpt
Nonfiction Biography & autobiography Educators
warning_amber
One or more licenses for this book have been acquired by your organisation details

The late Norman Rich (1921-2020) was an internationally recognized scholar of European history who taught at Brown University and Michigan State University, among other places. Professor Rich’s life and career were unorthodox. He came from a working-class background in Cleveland, Ohio, but even as a child he traveled widely and was fluent in several languages thanks to the influence of his mother, who emigrated from Germany to North America in 1908. As a teenager, Norman was briefly educated in Switzerland and personally witnessed many of the events that informed World War II, including Mussolini’s declaration of the Second Roman Empire, the eruption of the Spanish Civil War, and the 1936 Berlin Olympic Games. Norman was a committed pacifist and became a conscientious objector during World War II, living in a labor camp in the high desert of California. After the war, he earned his Ph.D. at the University of California at Berkeley, and then worked for five years as part of the American team studying and translating the mass of German Foreign Office records captured by the Allies at the end of the War. He subsequently held research fellowships at Princeton and Oxford. His meticulous research and command of original sources was such that his multi-volume works on German diplomacy in the years preceding World War I, Adolph Hitler’s purposes in instigating and prosecuting World War II, and 19th and 20th century diplomatic history became standards in their field. Yet Norman had many dimensions beyond that of an historian; other than his family, his first interests were music, art and architecture. Norman and his wife Joan Hitchcock Rich—known to her friends as Ning— were civic activists in Providence and longtime residents of Lyme, Connecticut. Hundreds, if not thousands, of students and friends were profoundly influenced and benefited by the Riches’ mentoring and friendship.