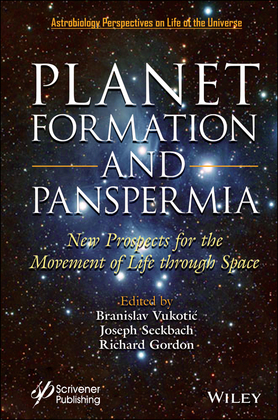 by Branislav Vukotic (Editor), Joseph Seckbach (Editor), Richard Gordon (Editor)
Buy for $188.00 Excerpt
Nonfiction Science and technics Science Astronomy
warning_amber
One or more licenses for this book have been acquired by your organisation details

An in-depth view of the panspermia hypothesis examined against the latest knowledge of planetary formation and related processes.

Panspermia is the concept that life can be passively transported through space on various bodies and seed, habitable planets and moons, which we are beginning to learn may exist in large numbers. It is an old idea, but not popular with those who prefer that life on Earth started on Earth, an alternative, also unproven hypothesis. This book updates the concept of panspermia in the light of new evidence on planet formation, molecular clouds, solar system motions, supernovae ejection mechanisms, etc. Thus, it is to be a book about newly understood prospects for the movement of life through space.

The novel approach presented in this book gives new insights into the panspermia theory and its connection with planetary formation and the evolution of galaxies. This offers a good starting point for future research proposals about exolife and a better perspective for empirical scrutiny of panspermia theory. Also, the key to understanding life in the universe is to understand that the planetary formation process is convolved with the evolution of stellar systems in their galactic environment. The book provides the synthesis of all these elements and gives the readers an up-to-date insight on how panspermia might fit into the big picture.

Audience
Given the intrinsic interdisciplinary nature of the panspermia hypothesis the book will have a wide audience across various scientific disciplines covering astronomy, biology, physics and chemistry. Apart from scientists, the book will appeal to engineers who are involved in planning and realization of future space missions.