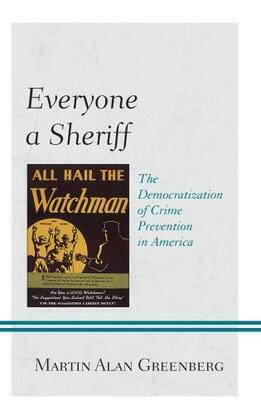 by Martin Alan Greenberg (Author)
Buy for $50.00 Excerpt
Nonfiction Social science Criminology Social work
warning_amber
One or more licenses for this book have been acquired by your organisation details

In Everyone a Sheriff, the word "sheriff" serves as a metaphor for programs involving citizens in social control initiatives. Partnership between community members and their local police force is at the heart of any effective strategy aimed at reducing urban crime and insecurity. Ordinary community residents represent a vast, untapped resource in the fight against crime, disorder, and fear. The real story of citizens long association with the policing function is revealed. The book highlights include: an in-depth examination of volunteerism primarily at the law enforcement level; the importance of preparing youth and minorities for careers in policing and homeland security; the need for transitioning police and citizen volunteers from serving not only as peacekeepers, but becoming "peacemakers"; a realistic view of various pitfalls when regular and volunteer police are thrust into patterns of co-existence when fighting crime out on the street or seeking solutions to crime; numerous examples of current police-sponsored citizen academies, police cadet and junior deputy programs; histories of the invention of police and citizen-supported neighborhood crime watch programs. The only way to successfully cross the divide between the police and public is to give meaning to the phrase: "the police are the people, and the people are the police."