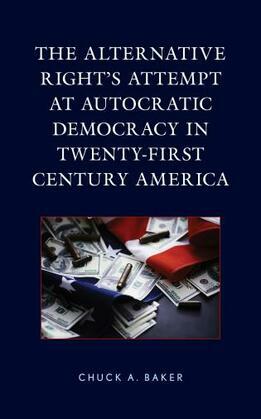 by Chuck A. Baker (Author)
Buy for $45.00 Excerpt
Nonfiction Social science Discrimination & race relations Political science Government Executive branch
warning_amber
One or more licenses for this book have been acquired by your organisation details

The Alternative Right’s Attempt at Autocratic Democracy in Twenty-First Century America analyzes the several significant factors that influenced the cultural environment to move American democracy toward authoritarianism. Chuck A. Baker hypothesizes that growing xenophobia, the 9/11 terrorist attacks, the 2008 recession, and neoliberal economic philosophy were the shocks that made possible a lurch toward autocratic democracy. Several of the central tenets embedded in fascism like conventionalism, acquiescence to coercion, and hostility toward the less powerful would manifest as autocratic-democratic rule gained traction. As minority communities were made vulnerable, the lethality of police practices against unarmed minorities and the government’s response to such coercive oppression motivated protests throughout America. The January 6, 2021 Capital riots made clear that the far-right was willing to utilize violence to meet their goal. Statements that situated ‘Making America Great Again’ reminded right-wing extremists of an epoch in which racism and sexism were part of the American society’s structure. This book examines, in a sociological manner, the factors that made autocratic democracy palatable to a large plurality of Americans. The text discusses the reason for social change in the middle twentieth century and then utilizes quantitative methodology to elucidate the events in the twenty-first century that threaten democracy through authoritarian practices.