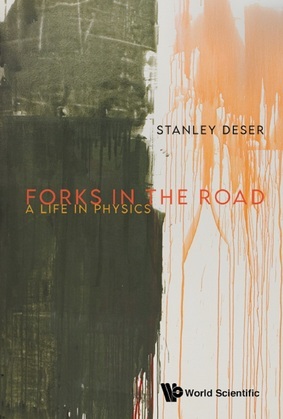 Forks in the Road

by Stanley Deser (Author)
Buy for $20.00 Excerpt
Nonfiction Biography & autobiography Science & technology Science and technics Science Physics Relativity
warning_amber
One or more licenses for this book have been acquired by your organisation details

Stanley Deser is a preeminent theoretical physicist who made monumental contributions to general relativity, quantum field theory and high energy physics; he is a co-creator of supergravity. This is his personal story, intended for a broad, scientifically curious audience, with emphasis on the historic figures that defined the modern aspects of the field.Beginning with an account of his early life in Europe during the fateful period leading up to WW2, it continues with his family's dramatic escape from the Nazis through their arrival to the US. His education at public institutions including Brooklyn College nurtured his love of physics from an early age. He earned his PhD at Harvard and spent fruitful postdoc years at the Institute for Advanced Study and the Niels Bohr Institute, where he met many of the luminaries of the field. Then followed a long career at Brandeis University and many visits to foreign institutions.His work earned him many awards and led to exotic experiences detailed in the later chapters. The appendices contain semi-technical descriptions of some essential physics, as well as a more general commentary about the role of physics and physicists in understanding the universe.Contents:

Theoretical Physics;History of Modern Physics;Supergravity;General Relativity;ADM;Institute for Advanced Study;Niels Bohr;Oskar Klein;JR Oppenheimer;Julian Schwinger;CERN;Brandeis University;Caltech'Fleeing 1930s Poland first for Palestine and then for France; escaping Paris in 1940 hours before the Nazi tanks came rolling in; catching the last safe train out of France with life-saving transit visas issued by an heroic Portuguese consul; securing passage on one of the last boats out of Lisbon to New York … Anyone with a childhood as tumultuous as this might reasonably expect adulthood to be something of an anticlimax, but for Stanley Deser another adventure was only just beginning, albeit an intellectual one in theoretical physics. Both the scientist and the lay reader can relish the anecdotes, told with wit and literary aplomb, involving the greatest minds of 20th century physics. Both will come away with a greater appreciation of a golden era for quantum field theory and general relativity to which Deser, co-discoverer of supergravity, was himself a major contributor.' - Michael J DuffImperial College London

'Having escaped Europe at age 10 with his parents, just before the holocaust, Stanley Deser, a wunderkind, entered graduate school at Harvard at 18. He went on to become a highly skilled physicist who worked with the best. His memoir is an exceedingly well written and fascinating tour of the world of physics in the later half of the 20th century. It contains many intriguing anecdotes, such as his description of a telephone conversation on his behalf between the father of the atomic bomb, J Robert Oppenheimer, and the father of the hydrogen bomb, Edward Teller, who were not exactly the best of friends. I could hardly put the book down and strongly recommend it to anyone, especially those with an interest in physics and how it is practiced.' - Irwin ShapiroHarvard University