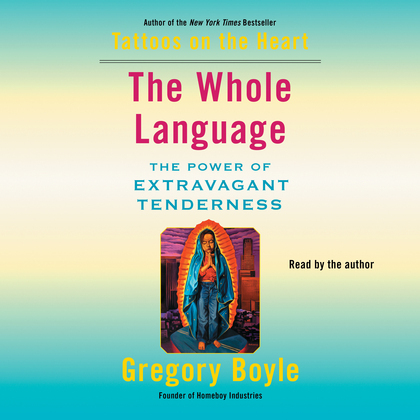 Gregory Boyle, the beloved Jesuit priest and author of the inspirational bestsellers Tattoos on the Heart and Barking to the Choir, returns with a call to witness the transformative power of tenderness, rooted in his lifetime of experience counseling gang members in Los Angeles.

Over the past thirty years, Gregory Boyle has transformed thousands of lives through his work as the founder of Homeboy Industries, the largest and most successful gang-intervention program in the world. Boyle’s new book, The Whole Language, follows the acclaimed bestsellers Tattoos on the Heart, hailed as an “astounding literary and spiritual feat” (Publishers Weekly) that is “destined to become a classic of both urban reportage and contemporary spirituality” (Los Angeles Times), and Barking to the Choir, deemed “a beautiful and important and soul-transporting book” by Elizabeth Gilbert and declared by Ann Patchett to be “a book that shows what the platitudes of faith look like when they’re put into action.”

In a community struggling to overcome systemic poverty and violence, The Whole Language shows how those at Homeboy Industries fight despair and remain generous, hopeful, and tender. When Saul was thirteen years old, he killed his abusive stepfather in self-defense; after spending twenty-three years in juvenile and adult jail, he enters the Homeboy Industries training and healing programs and embraces their mission. Declaring, “I’ve decided to grow up to be somebody I always needed as a child,” Saul shows tenderness toward the young men in his former shoes, treating them all like his sons and helping them to find their way. Before coming to Homeboy Industries, a young man named Abel was shot thirty-three times, landing him in a coma for six months followed by a year and a half recuperating in the hospital. He now travels on speaking tours with Boyle and gives guided tours around the Homeboy offices. One day a new trainee joins Abel as a shadow, and Abel recognizes him as the young man who had put him in a coma. “You give good tours,” the trainee tells Abel. They both have embarked on a path to wholeness.

Boyle’s moving stories challenge our ideas about God and about people, providing a window into a world filled with fellowship, compassion, and fewer barriers. Bursting with encouragement, humor, and hope, The Whole Language invites us to treat others—and ourselves—with acceptance and tenderness.