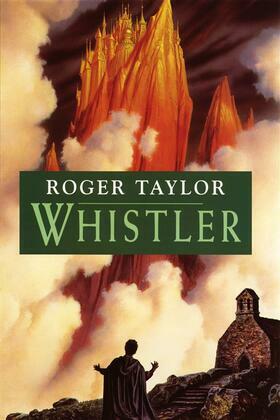 Canol Madreth is a small, remote and mountainous country at the centre of Gyronlandt. It is governed directly by an elected parliament, the Heindral, and indirectly by the stern and sombre tenets of the Church of Ishrythan.

Then, one fateful day, ominous clouds gather over Canol Madreth, and, mysteriously affected by whatever brought them, the impetuous Brother Cassraw is transformed into a fiery religious demagogue. The stability of the whole of Gyronlandt and beyond is threatened by his strange, compulsive power and by the dark, primitive religion he begins to preach.

Only Allyn Vredech, fellow priest and lifelong friend, senses the terrible truth. He then finds himself fighting not only for his own faith, as he struggles to accept the world-destroying nature of the force that has possessed Cassraw, but also for his very sanity as he is drawn into worlds far beyond Canol Madreth...

Worlds that cannot be... Worlds that exist only in the dream of the Whistler... Or do they?

Whistler is an independent novel set in the world of "The Chronicles of Hawklan".