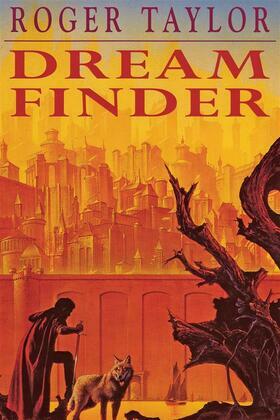 Since their leader Petran died, the Guild of Dream Finders have been timid, and their ancient craft has fallen into disrepute. Petran's son Antyr, young, grief stricken and only part trained, could not begin to fill the vacuum left by his father.

Increasingly he has become a bitter spectator, with neither the cynicism to become rich by pandering to the whims of the wealthy, nor the courage to offer them his skills honestly and without fear. His nightly visits to the alehouse have resulted in a dwindling of his customers, and the quarrels with his strange Companion have grown increasingly unpleasant.

Then mysteriously one night, Antyr is taken to Duke Ibris of the City of Serenstadt, who has been troubled by mystifying and unsettling dreams. It is the beginning of a journey that leads inexorably to a terrible confrontation with a malevolent blind man possessed of a fearful otherworldly sight, and Ivaroth, a warrior chief determined to conquer the Duke's land and all beyond...

Dream Finder is an independent novel set in the world of "The Chronicles of Hawklan".