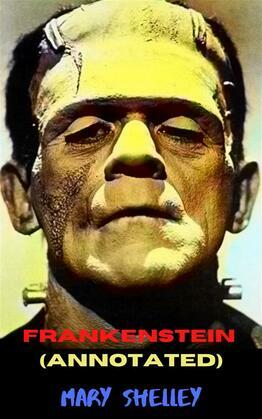 by Mary Shelley (Author)
Buy for €0.99 Excerpt
Fiction Horror Romance Gothic
warning_amber
One or more licenses for this book have been acquired by your organisation details

This is the Annotated Version of the Original Novel. We had annotated this Novel by adding a summary of 40100 words (approx.) which consists of a 50% to 60% summary of the total Novel.

Table of Contents added for easier navigation. You can read any chapter or the main summary directly with 1 click if you want to.

The Brief description of the novel is as follows:- Frankenstein; or, The Modern Prometheus is a novel written by English author Mary Shelley (1797–1851) that tells the story of Victor Frankenstein, a young scientist who creates a hideous sapient creature in an unorthodox scientific experiment. Shelley started writing the story when she was 18, and the first edition was published anonymously in London on 1 January 1818, when she was 20. Her name first appeared in the second edition published in Paris in 1821. Shelley traveled through Europe in 1815 along the river Rhine in Germany stopping in Gernsheim, 17 kilometers (11 mi) away from Frankenstein Castle, where two centuries before, an alchemist engaged in experiments. She then journeyed to the region of Geneva, Switzerland, where much of the story takes place. The topic of galvanism and occult ideas were themes of conversation among her companions, particularly her lover and future husband Percy B. Shelley. Mary, Percy and Lord Byron had a competition to see who could write the best horror story. After thinking for days, Shelley dreamt about a scientist who created life and was horrified by what he had made, inspiring the novel. Though Frankenstein is infused with elements of the Gothic novel and the Romantic movement, Brian Aldiss has argued that it should be considered the first true science fiction story. In contrast to previous stories with fantastical elements resembling those of later science fiction, Aldiss states the central character "makes a deliberate decision" and "turns to modern experiments in the laboratory" to achieve fantastic results. It has had a considerable influence in literature and popular culture and spawned a complete genre of horror stories, films, and plays. Since the publication of the novel, the name "Frankenstein" has often been used to refer to the monster itself. In the novel, Frankenstein's creation is identified by words such as "creature", "monster", "daemon", "wretch", "abortion", "fiend" and "it". Speaking to Victor Frankenstein, the monster says "I ought to be thy Adam, but I am rather the fallen angel" (which ties to Lucifer in Paradise Lost, which the monster reads, and which relates to the disobedience of Prometheus in the book's subtitle). In Shelley's Gothic story, Victor Frankenstein builds the creature in his laboratory through an ambiguous method consisting of chemistry and alchemy. Shelley describes the monster as 8-foot-tall (2.4 m) and hideously ugly, but sensitive and emotional. The monster attempts to fit into human society but is shunned, which leads him to seek revenge against Frankenstein. According to the scholar Joseph Carroll, the monster occupies "a border territory between the characteristics that typically define protagonists and antagonists". Frankenstein's monster became iconic in popular culture and has been featured in various forms of media, including films, television series, merchandise, and video games. His most iconic version is his portrayal by Boris Karloff in the 1931 film Frankenstein.