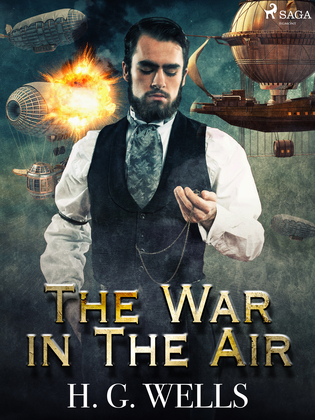 The War in The Air

by H. G. Wells (Author)
Buy for $10.99 Excerpt
Fiction Classics War & military
warning_amber
One or more licenses for this book have been acquired by your organisation details

Did H. G. Wells foresee World War One? Or was he just caught up in the frenzy over the recent invention of flying machines?

With "The War in the Air" (1908) the frenzy around aircraft was at its peak. Wells simply couldn’t help himself but buy into the future. Balloons, heavier flying machines, zeppelins, and many more soar freely throughout this novel, offering a somewhat sinister peek into what the future may hold.

This remarkably progressive book tells the story of the world focusing mostly on Bert Smallways (a minimised Wells self-portrait) who is, rather accidentally it seems, thrown into the middle of the story.

A fast-paced, compelling, and futuristic novel perfect for sci-fi and steampunk enthusiasts.

H. G. Wells (1866-1946) was an English writer, remembered mostly for his science fiction works. Often described as a futurist, H. G. Wells’s influence cannot be neglected for his works foresaw many technological innovations such as space travel, the atomic bomb, and the Internet. Four times Nobel Prize in Literature nominee, Wells explored a wide array of themes in his works, occupying one of the central seats in the canon of British literature. Some of his best works include the time-travel novel "The Time Machine", the sci-fi adventure novel "The Island of Dr. Moreau", the mankind-versus-aliens novel "The War of the Worlds" and more than seventy short stories.