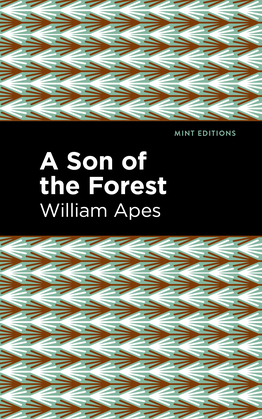 A Son of the Forest

A Son of the Forest (1829) is an autobiography by William Apes. An indentured servant, soldier, minister, and activist, Apes lived an uncommonly rich life for someone who died at just 41 years of age. Recognized for his pioneering status as a Native American public figure, William Apes was an astute recorder of a life in between. His autobiography explores the psychological effects of oppression, addiction, and cultural change from the viewpoint of a man who experienced them all. “[T]he great fear I entertained of my brethren, was occasioned by the many stories I had heard of their cruelty towards the whites—how they were in the habit of killing and scalping men, women and children. But the whites did not tell me that they were in a great majority of instances the aggressors—that they had imbrued their hands in the life blood of my brethren, driven them from their once peaceful and happy homes…” While out on a berry picking expedition as a boy, William—by then living as an indentured servant with a local white family—spots a group of Native women. From the reaction of his foster family, he realizes for the first time in his life the inherent racial biases he has absorbed despite recognizing his own Pequot heritage. A Son of the Forest is a groundbreaking autobiography from a pioneering author and activist of the early nineteenth century. With a beautifully designed cover and professionally typeset manuscript, this edition of William Apes’ A Son of the Forest is a classic of Native American literature reimagined for modern readers.