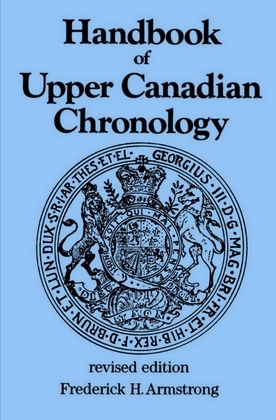 by Frederick H. Armstrong (Author)
Buy for $9.99 Excerpt
Nonfiction History History by country United States Historical period Pre-Confederation (to 1867) Reference Canada
warning_amber
One or more licenses for this book have been acquired by your organisation details

A revised and greatly expanded edition of this important and long out of print reference book on Upper Canada to 1841. Similar in format to A Handbook of British Chronology, this work is a listing of all legislative councilors, and assemblymen, all officials, dates of all parliaments, and judges and court officials. It gives as well, a complete picture of local government: legislation relating to local territorial authorities, lists of counties, districts, cities and townships, and all major officials.

The new edition includes the basic population statistics, a completely revised list of the events of the War of 1812 and new lists of the events of the Rebellions of 1837 and the Patriot Raids that followed the next year, tables of the provincial and British statutes relating to the incorporation of businesses, the officers of the major Upper Canadian corporations, a complete list of post office officials and post offices, and a list of provincial surveyors, and the major disasters.