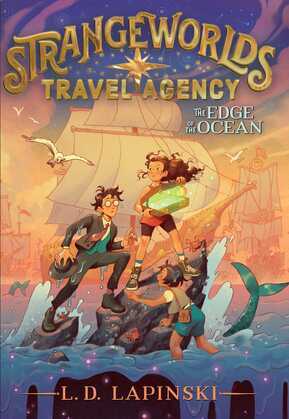 The Edge of the Ocean

by L. D. Lapinski (Author)
Excerpt
Fiction Juvenile & young adult Action & adventure Fantasy, magic
warning_amber
One or more licenses for this book have been acquired by your organisation details

Flick tries to save a watery world from total destruction in this magical second book in the Strangeworlds Travel Agency series.

Flick is now a badge-wearing member of the Strangeworlds Travel Agency, so when an urgent summons arrives at from Pirate Queen Nyfe, she and Strangeworlds Society guardian Jonathan immediately pack their bags for an adventure to The Break, a world of magic and piracy.

Nyfe’s world is falling apart. The Break is used to having ships vanish without a trace, but there has been a sudden increase that can’t be explained by giant squid or merpeople. The edge of their flat world is coming ever closer to them and they need to escape before it collapses entirely.

But how do you sail a ship through a suitcase? Or fit in a mer-queen the size of a whale? Flick and Jonathan must find a way to transport the inhabitants of the Break to another world before theirs disappears forever.