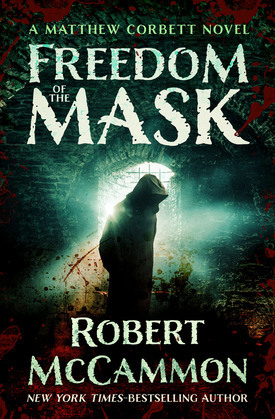 Freedom of the Mask

At the dawn of the eighteenth century, Matthew Corbett, professional problem solver, has left New York for Charles Town on an assignment from his agency—and vanished. As his friend Hudson Greathouse sets out to track him down, he has no idea that Matthew is across the sea in London’s notorious Newgate Prison, accused of murdering a Prussian count and targeted by a masked vigilante. Now Hudson, accompanied by Matthew’s beloved Berry Grigsby, must sail to England in hopes of saving him in time . . .

Featuring Daniel Defoe as a fellow inmate at Newgate, this whirlwind tale of mystery and adventure comes from Robert McCammon, the multiple award-winning author of five previous novels featuring Matthew Corbett, as well as such classics as Swan Song and Boy’s Life.

Praise for the Matthew Corbett Novels

“Matthew is a very well designed character, very much a man of his time but also ahead of his time, as though he has stepped out of a modern-day crime lab into the early eighteenth century.” —Booklist

“This popular series takes us to a long forgotten time with characters who never fail to entertain.” —The Florida Times-Union