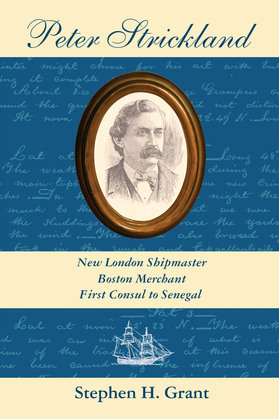 This is the first biography of Capt. Peter Strickland, a little-known Connecticut Yankee who crossed the Atlantic one hundred times in command of a sailing vessel, traded with French and Portuguese colonies during the period 1864-1905, and served as the first American consul to French West Africa for over twenty years.

We know about Peter Strickland’s long life because he wrote a daily journal from the age of nineteen until the year he died. He broke away from a long line of farmers to adopt a seafaring life at age fifteen, and his merchant marine career led him from the east coast of the United States to the west coast of Africa. He introduced American tobacco and wood products into French and Portuguese colonies, and on the return trips carried animal hides and peanuts in his 100-ton schooners. Eventually, the U.S. State Department asked him to become the first consul in French West Africa, with residence in Senegal. The captain accepted the terms: He would receive no salary, but he could keep the port fees he collected and continue to practice his import-export business.

This book tells his life story, from his accomplishments and adventures to coping with the epidemics of the day and a tragic personal loss—in the process capturing a unique era in American diplomatic history.