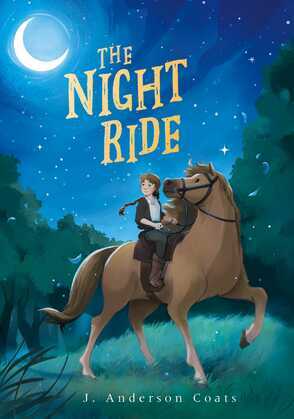 The Black Stallion meets Tamora Pierce in this adventure-filled middle grade novel about a young stable girl who discovers a secret that endangers her beloved horse and threatens her future.

Sonnia loves horses more than anything. She works at her family’s struggling pony ride business but dreams of the beautiful steeds in the royal stables, especially Ricochet, who she’s been slowly saving money to buy—even though she knows people from her impoverished neighborhood are rarely so lucky.

Then Ricochet is moved to the racetrack across town, and Sonnia lands a job there. Now, she can see Ricochet every day and earn enough money to buy him in no time—all while helping her family with her new wages! She even joins the junior racing cadre to train to become a jockey. But then she uncovers their secret pastime: competing in the Night Ride, a dangerous and highly illegal race in the darkest hours before dawn. Every race puts the horses at risk.

Sonnia wants to protect the horses she’s grown to care for, but she’s only a kid from the poor side of town—considered expendable, just like the horses. If she just keeps her head down, soon she can buy Ricochet and get him out of there—and keep supporting her family. But would she be able to live with herself?